How Does Wasp Spray Work? The Simple Answer…

Wasp spray is something that many people have used in the past, or are at least familiar with. It’s viewed by most as an extremely convenient product that can help keep these vicious insects away from their home.

But how does wasp spray work?

This guide will answer this question and list the most effective wasp sprays on the market today.

How Does Wasp Spray Work?

Wasp sprays are, perhaps, some of the most effective pest products you can buy. With an unassuming can, you can knock wasps right out of the air, causing instant death to entire nests and their inhabitants. It’s a sight to behold and certainly eliminates the fear that so many people have of these stinging insects.

But have you ever wondered how wasp spray actually works? The mechanics behind wasp spray are fascinating. 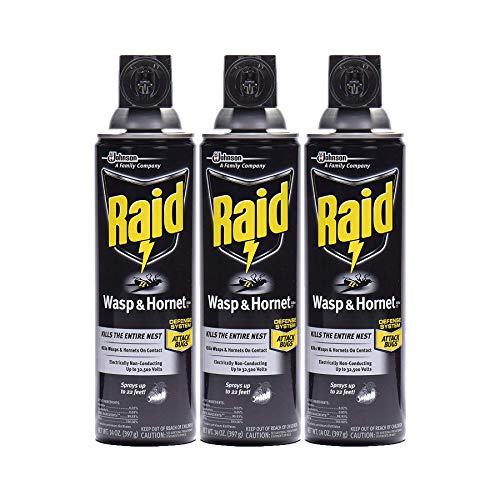 The magic behind wasp sprays comes down to the active ingredients. Formulas can vary from one manufacturer to the next, but most utilize specific types of insecticide chemicals. These include pyrethroids and pyrethrins or carbamates and organophosphates. This is a more aggressive method than keeping wasps away with scents they hate, but it’s definitely more effective.

Pyrethroids and pyrethrins are, by far, the most commonly used. They are a class of chemicals that produce the signature instant-kill effect, which professionals in the extermination industry often call “knockdown.”

Now that we have that bit of confusion cleared up let’s go into how wasp spray works in regards to these substances.

Pyrethroids and pyrethrins are insecticides that act as neurotoxins. Upon contact with wasps and other flying insects, the substance wreaks havoc on the nervous system and prevents crucial biological functions from occurring. This is the fundamental way that wasp spray works.

In an instant, a few things happen to a wasp’s body. First, the pyrethroids and pyrethrins cause extreme muscle contractions. The body exerts an overwhelming amount of energy at one time.

Secondly, the spray causes paralysis. The neurotoxic substances affect the sodium channels in the nerves. It holds them open, preventing the nerves from resetting.

Both the muscle contractions and the paralysis cause the wasp to fall to the ground immediately. It’s why sprays seemingly cause death mid-flight to these stinging bugs! But that’s not all.

The muscle contractions and seizures have lethal effects on the wasp’s overall health. Insects lack blood vessels and arteries, but they do have hearts. The open circulatory system contains hemolymph, which is responsible for moving salts, nutrients, hormones, and metabolic waste throughout the body.

When the wasp spray contacts the body and causes paralysis, the heart can’t move the hemolymph to support organs. It’s the closest thing to a heart attack that insects can have, causing immediate death.

As if that weren’t enough to reassure you that wasp sprays do indeed kill these bugs, the neurotoxic substances actually stop aspiration. Wasps breathe by expanding and contracting their abdomens to push air through holes spiracles, which are several holes throughout the thorax and abdomen.

Guess what happens when the wasp’s muscles contract and become paralyzed! They’re unable to breathe and quickly suffocate.

To sum up, wasp sprays do a lot of damage to these bugs! It essentially causes a heart attack, paralysis, and suffocation. All that happens very quickly after the active wasp spray ingredients get on the body, leaving very little chance for survival.

Quick Tip: For those few lucky bugs that don’t die instantly, it’s only a matter of time before they befall the same fate. In many cases, the wasps return to the nest to spread the pyrethroids and pyrethrins to the entire colony. Even if they make it back to the nest, those survivors end up killing the other wasps for you.

As we mentioned earlier, taking a peek at the ingredients list of effective wasp killers might confuse you. Pyrethroids and pyrethrins are a class of chemical substances.

Pyrethrins refer to a group of natural insecticidal compounds. They come from certain types of chrysanthemum flowers (some of which are great plants that repel wasps). To take advantage of them, manufacturers have to extract the compounds from the flowers carefully.

Pyrethroids are similar to pyrethrins, but they refer to several synthetic compounds. These are made to mimic the effects of the natural pyrethrins. Because they act so similar to one another, the two substance groups are seen as one unit.

Many different types of active wasp spray ingredients fall into the pyrethroids and pyrethrins class. Some of the most common you’ll see in wasp sprays include:

The best and most effective wasp sprays typically use a couple of those active ingredients to kill wasps on contact.

Quick Tip: You may also see sprays with carbamate and organophosphate. These chemicals are standard components in insecticides and herbicides. On wasps, they typically throw the nervous system out of whack and cause muscle seizures.

Whatever active ingredient a spray uses, formulas also contain other additives. They also have varying degrees of ingredient concentration to produce the desired effects. As a result, not all wasp killers will perform the same way. The size of the spray droplets comes into play as well.

Generally, the insecticidal strength of wasp sprays depends on how quickly it can induce that signature knockdown effect. High concentrations of the active wasp spray ingredients lead to higher potent and quicker results.

It’s not just the chemical formula that does the trick to kill wasps. How the product exits the can and disperses through the air plays a big part in its effectiveness.

Most wasp sprays are in tightly packed aerosol cans. When you push down on the trigger, the liquid inside quickly turns into a finely dispersed mist. Every detail matters here!

The size of the individual droplets has to be just right. If they’re too big, the chances of the product getting onto the wasp mid-flight are pretty low. The droplets must be extra-fine to be effective.

Another critical factor is the spray distance. Let’s face it, most of us aren’t brave enough to get up close and personal to a wasp nest. Doing so is just asking to get stung!

Fortunately, wasp sprays provide plenty of safe distance between you and those stingers. Most products offer a maximum spray distance of 15 to 20 feet. That’s a considerable amount of space to stay safe.

Some sprays do even more! Several big-name brands have spray distances of 20, 22, and even 27 feet! This information is readily available on the can, so you shouldn’t have any problems choosing a spray you’re comfortable using.

Quick Tip: Typically, 15 feet is the “sweet spot” for tackling nests. At that distance, the liquid solution exits the can in a somewhat straight line. The dispersal pattern makes it a bit easier to focus the spray onto the nest. As you increase the distance, you get more coverage to take down wasps as they fly.

Brands Of Wasp Spray That Work The Best

There’s no shortage of wasp sprays out there to try. Take a look through your local home improvement or big-box store, and you’ll likely see a few recognizable brand names.

The following wasp spray brands have solid reputations for providing the best results you can ask for.

Raid is one of the most recognizable names in pest extermination. The wasp spray is a fantastic product that can kill wasps on contact. It even kills larvae and pupae hiding in the nest.

Thanks to the 22-foot spray distance, saturating a nest shouldn’t be an issue. It also offers a decent spread. The nozzle does an excellent job of creating a fine mist. A well-aimed spray can coat the body and leave behind a fine layer of residual product on the wings.

Even if the bugs make it back to the nest, the spray will spread to others.

The main ingredients in Raid are Cypermethrin and Prallethrin, which effectively kill wasps, mud daubers, yellow jackets, and other stinging insects.

Ortho wasp spray utilizes Tetramethrin and Sumithrin as the active wasp spray ingredients. The pyrethroids kill wasps and other flying insects with ease.

This wasp spray works a bit differently than others. It’s not entirely liquid, as the formula turns into an expanding foam once it exits the can. The solution mixes with air, creating a thick substance that stops even the most agile wasp in its tracks.

The unique thing about the Ortho spray is that you can trap wasps in their nest. The 20-foot spray distance lets you tackle the job from afar. Aim for the opening of the nest if it’s accessible.

The foam will expand to prevent wasps from escaping. From there, you’re free to saturate the nest and kill every insect in the colony!

The Spectracide wasp spray has the farthest spray distance of all. You can be as far away as 27 feet, thanks to the powerful jet spray nozzle.

Prallethrin & lambda-cyhalothrin are the active ingredients of choice. Because of the pyrethroids and pyrethrins, this wasp spray works and will instantly kill the insects you’re after. In addition to wasps and hornets, the spray is also effective against scorpions, ants, tent caterpillars, and more.

The spray is non-staining, making it safe to use on your home’s exterior. It also has residual action. Bugs that escape without dying will spread the chemicals to others. Spectracide also says that the residue will kill any wasps that return to the nest several days after the initial application.

Knowing how wasp spray works can help you utilize it a bit more effectively. When you’re familiar with the way that the ingredients interact with wasps, you’ll be able to eliminate these insects while staying as safe as possible.

If you’re curious about anything else related to wasp spray (or how to apply it), send us a message!

Are Mosquitoes Attracted To Light? The Real Answer

When Do Coyotes Hunt & Do They Come Out During The Day?

BC Pest Control is a participant in the Amazon Services LLC Associates Program, an affiliate advertising program designed to provide a means for sites to earn advertising fees by advertising and linking to Amazon.com. Learn more.